LIVE FROM MIAMI! The sensationalism shown on television can only be topped by the drama that happens behind the camera! After being fired from her job in Los Angeles, Charlene “Charley” Thomas moves to sizzling Miami and begins working as news director at a local television station. While getting used to her new gig, Charley wakes up to the fact that her station manager, Jonathan Lefton, is the boss from hell who will do anything for a story no matter who gets hurt in the process. When nude pictures of noon anchor, Miranda Andrews, are discovered in the men’s room of a Key West bar, all hell breaks loose. They end up on Lefton’s desk and he promotes her over the main anchor, sparking off a firestorm. Miranda’s quickly thrown into the mix and assigned special reports. Charley finds herself overseeing an investigation that could shine light on the guilt of a dirty cop. Real life begins to mimic the drama of broadcast news when station personalities face life and death all for rating and Emmys! VIEWER DISCRETION ADVISED is a modern day “Sex and the City” meets “Broadcast News.”

I never know what’s in store for me when I crack open some of novels I’m asked to review.  It’s good for me to read outside my chosen genre of romance, and it feels fine to stretch my legs and test other waters. Next in line is chicklit (You know, books that are written by and targeted toward women). When I think of chicklit, I think of books like Bridget Jones Diary and other light-hearted and fun reads. But we all know that chicklit is more than that. It accounts for novels that cover more serious issues and problems with today’s world. Well, Viewer Discretion Advised fits right in the middle. It’s fun and  upbeat, but it’s more than that. Cindy Roesel takes the reader on a whirlwind tour of what it’s like behind the scenes in a newsroom. Fast-paced, smart and savvy, yet it deals with issues in the lives of the people who work at WCAR–drinking problems, low self-esteem, cheating husbands, fragile egos, and the problems that result with long distance relationships.

How Cindy managed to pack all that in under 300 pages is a mystery to me, but it’s all there. The reader can’t help but root for Charley. There’s something inherently likable about her. Everyone around her can sense it as well. This also means that we love the people she loves by way of association.  The reader wants her to end up with Oz, needs Rori to get help, and Charley to succeed in the cut-throat world she has landed in. But Charley knows her stuff (As does Cindy) and with odds like that she has to succeed. And the same goes for Cindy Roesel and Viewer Discretion Advised as well.

And one thing is certain: I’ll never look at the news the same way again. 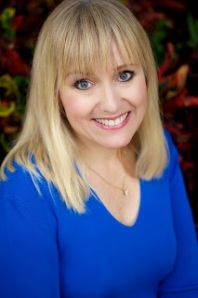 Amie: Where did the story idea come from/how did it come about?

Cindy: It’s often said, “write what you know.” Well. I’ve wanted to write a novel since I was a little girl and the majority of my first career has been as a TV news anchor and reporter and that includes writing, so it makes sense that my first book should be about a broadcast journalist.  VIEWER DISCRETION ADVISED is a suspenseful, romantic thriller set in Miami, Florida, which features news director, Charlize “Charley” Thomas.  It’s a mix of the new HBO hit show “The Newsroom” meets “Sex and the City.”

Amie: One thing you want the reader to walk away with after reading this book.

Cindy: It’s important that readers walk away knowing that if you work hard you can accomplish anything.  That may sound hokey, but I believe in the dream.  I was the first one in my family to graduate from college, go into a profession and I won an Emmy Award for my hard work in Broadcasting.  Charley comes up against quite a few obstacles, but she doesn’t give up and she never looks for the easy way to get something done.  It’s really important young women on their career path find a mentor they believe in that they can trust.  It’s important to me that readers of VIEWER DISCRETION ADVISED see Charley as a positive professional woman.

Amie: Why did you choose your genre?

Cindy: I always knew my first attempt at writing would be fiction. VIEWER DISCRETION ADVISED evolved into a suspenseful, romantic, thriller as I wrote it.  I really didn’t plan it that way.  Actually, I thought it was going to be a chick-lit romance, but then the story and the characters took over.  There comes a point when the writer, in this case, me, stops resisting and follows their lead so the project is organic.

Amie: Is there anything you find particularly challenging about writing?

Cindy: There are many challenges for a writer, especially one who wants to write well.  Writers have to not only write, but they must read, and that includes reading everything, not only what they enjoy.  It’s important to surround yourself with other writers in real life and on the Internet.  I write book reviews for a blog called Chick Lit Central and I’ve made a lot of friends over the web, some of whom I’ve met in person.  We read one another’s work, and help proof each other.  I’m constantly taking classes and going to author readings at my local bookstores.  The bottom line is you must always be working at your craft.

Another challenge is getting my butt in the chair to actually write, but once I’m there, you practically have to peel me out.  There are so many other things vying for my attention, and I’m easily distracted.  Let’s face it, once we’re on the computer there’s Facebook, twitter, LinkedIn, ChickLitPlus, your Blog, mine, Chick Lit Central…. all screaming our name….  so I guess what the big challenge comes down to for me is to FOCUS!

Amie: What advice would you give to writers just starting out?

Cindy: The first thing I’d tell writers who are just starting out is, “Congratulations!  You’ve entered a very special club.  What you’re going to do is honorable work and the people you’re going to surround yourself with are unique, life as you know it has changed.  Number one rule:  There are no rules, except this one.  Don’t fall in love with your first drafts.  The final project never looks like what you first put down on paper.  Remember, writing is rewriting.  Have fun!”

Amie: Do you ever suffer from writer’s block?

Cindy: No, I don’t believe in writer’s block.  When I have to write something or I have a deadline, I do it.  It may not be my best work, but I fulfill my obligations.

Amie: What tools do you feel are must-haves for writers?

Cindy: A comfy writing environment, a dictionary, thesaurus, EB White’s, “The Elements of Style,” a full pot of coffee and lots of writer and non-writer friends!  I also happen to love having plenty of plain M&Ms on hand…. yummy!

Thank you so much Amie for inviting me and VIEWER DISCRETION ADVISED to visit you and your wonderful blog and Facebook site.

Thanks for coming, Cindy. Readers, you’re all  invited to contact Cindy anytime if you have questions or comments about anything here or in her novel.

And…**Everyone who leaves a comment at http://www.clpblogtours.com/2012/05/viewer-discretion-advised-by-cindy.html will be entered to win a $10 Amazon gift card! Anyone who purchases their copy of Viewer Discretion Advised before August 20 and sends their receipt to Samantha (at) ChickLitPlus (dot) com, will get five bonus entries.** Whoop!